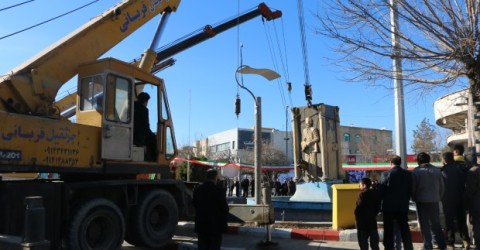 The decision of the Municipal Council of the City of Salmas, South Azerbaijan was carried out earlier this week and the chauvinist poet, Ferdowsi’s monument was knocked down and removed from the city’s main squire. Reportedly, the monument’s removal was being demanded by Turkic residents of the city for many years.

Abu ʾl-Qasim Ferdowsi Tusi (940–1020 CE) was the writer of “Shahnameh”, meaning “Letter of King”.
“Shahnameh” contains illusion – based verses in which the Persians are exaggeratedly admired for their bravery even though in real life they were conquered and ruled by the Turks. In his illusory poetry Ferdowsi frequently degraded other ethnic-national groups particularly the Turks and Arabs. 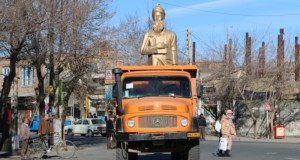 Ferdowsi authored “Shahnameh” while his homeland, Tus (currently Mashhad, Iran) was annexed into the Turkic Ghaznavid Empire.
Ferdowsi’s Shahnameh also comprises overly sexist poetry in some of which dogs_considered dirty-untouchable in Persian culture_ are admired over women.
In one of his poems Ferdowsi wrote: “… A dog is superior over a hundred devoted-abstemious women!” However, Ferdowsi’s Shahnameh is considered as a holy manuscript by the contemporary Persian racists. They demand that there must be a Shahnameh in each and every Iranian home.