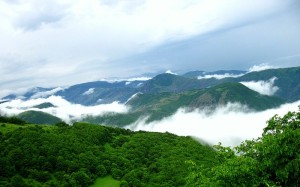 Southern Azerbaijan is famous for its great natural beauty. There are 17 rivers and two lakes in the region. The northern, alpine region, which includes Lake Urmia, is mountainous, with deep valleys and fertile lowlands. Grains, fruits, cotton, rice, nuts, and tobacco are the staple crops grown the region. The temperatures in Southern Azerbaijan are also very variable. For example, in the north, winters are generally cold and snowy and summers are moderate. While in the plains the regions experience winters that are relatively cold and warm summers. The Orumieh province located in the north-west of Southern Azerbaijan, it is a mountainous area with a diverse and vast topography. A long mountain range is situated on the western part of the province which forms the international border with Iraq and Turkey. Melted snow that originates from the mountains creates many streams that flow through the various valleys making fertile lands.