Southern Azerbaijan has fertile soil and a pleasant climate and has for a long time been the destination of nomadic tribes. One such tribe was the Medes who are generally thought to be the ancestors of today’s Azerbaijanis. It is likely that Azerbaijani people settled on the Iranian mainland before any Persian tribes entered the area. A tribe of the Medes took control of the north-western part of Iran in what today compromises Azerbaijan in around the 6th Century BC. The Medes Empire ruled for 75 years before it became a part of the Empire known as “Persian” Empire.
The Asiatic Turks, the Seljuks, dominated the region in the 11th and early 12th centuries, and contributed much to the culture of the region. The Turkish influence and strong immigration into the region placed Southern Azerbaijan at the centre of power in the Empires. 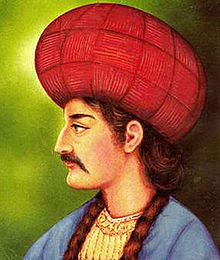 The Azerbaijani Turks established their first united empire in 1501 as the Great King Ismail Khatai declared the Safavid Empire in Tabriz in the year of 1505. The Safavid were replaced by Nadir Shah Avshar and created the Avshars Empire.

The Gajar (Qajar) dynasty was the last of the Turkish dynasties to rule Gajar Kingdem. Turkic states, such as the Protected States of Gajar ( Memaleki Mahruseyi Gaja), strongly affected the history of modern Azerbaijan. The Gajar dynasty ruled most parts of present day Iran, including Southern Azerbaijan, 1794-1925. During this time only men from the Azerbaijani people could claim right to the throne of the state of Gajar.

The undercurrent dynasty seems to have been to unite all land previously ruled by their ancestors, the moves led to long lasting wars between the Gajars and Russia, as Russia quested to seize Southern Caucasus.

Ultimately, these hostilities led to the division of Azerbaijan into a northern part ruled by Russia and a southern part ruled by the Gajar confederation, as agreed in the treaties of Gulustan (1813) and Turkmenchay (1828). Before the split the Azerbaijani boarders reached from what is today Derbet, the most southern city of Russia, to the province of Hamadan, south west of Tehran. During Russian rule of Northern Azerbaijan its territory decreased significantly, this later became the Republic of Azerbaijan. 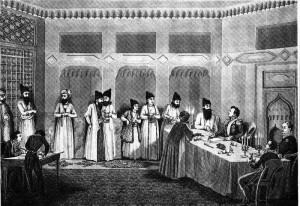 During the Constitutional Revolution (1905-1911) Southern Azerbaijan played a key political role, as the starting point of the revolution occurred in Tabriz, capital of Southern Azerbaijan. During the First World War the Gajar dynasty remained in power in Tabriz, and the city became one of the most powerful in Iran, holding the seat of the crown prince. In 1920 the Pro-democracy revolution under Sheykh Muhammed Khyabbani also begun in Tabriz and Southern Azerbaijan gained independence for six months. However, this short lived independence was put to an end by battles between the Soviet Union and Iran and resulted in the killing of tens of thousands of Azerbaijani Turks.

In 1925 when the Gajar state collapsed, Southern Azerbaijan was annexed into Iran and there was a massive move of non-Azerbaijanis to the cities of Gazvin and Hamadan where more than a half of the population are now of Azerbaijani descent.

Office Building of the Government of South Azerbaijan in Tabriz. 1945-1946

After the Second World War, Southern Azerbaijan became an independent state, the Azerbaijan People’s Republic, was established. During this year of independence, the Turkish language in schools and on radio stations became ingrained and Tabriz was established as an urban and cultural center. Independence, however, again only lasted for a short time, after a year the Soviet Union and Iran again fought bloody battles for the state in a process which killed approximately 35,000 people. After the crushing of the independent state, the Iranian government gathered all Turkish publications published during the republic and burned them in public. All people that had worked or supported the formation of the independent state were persecuted, and led to the movement for Southern Azerbaijani rights underground.

The National Anthem of The Azerbaijan People’s Republic