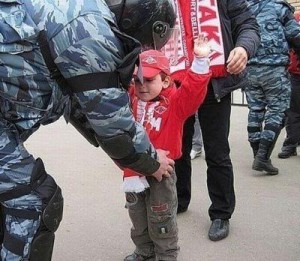 An Azerbaijani infant is being searched  by a policeman upon entry into a football stadium in Tabriz.

Mass arrests and suppression by Tehran regime have been a common feature of Azerbaijani cultural  gatherings,  demonstrations, and even sport contests.

According to UN and Amnesty International hundreds of Azerbaijani activists have been jailed, accused of “acting against national security”.