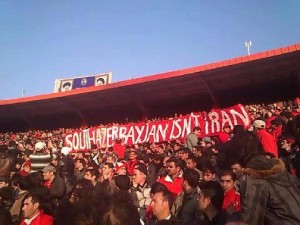 This banner ” South Azerbaijan Is Not Iran” was demonstrated by the fans of “Tractor” during a football match of Asian Football Championship in Tabriz.. The Tractor Team is one of the most popular football teams in South Azerbaijan.

In May 2006 a cartoon implying Azeris were cockroaches was published in an Iranian magazine. Whilst it deeply offended many Azerbaijani Turks, it initiated a feeling of stronger unity in the ethnic group. The rise in Azerbaijani nationalism has made the central government in Tehran feel increasingly threatened. Iranian authorities accuse the Azerbaijani nationalists of promoting “pan-Turkism” and committing disobedience of God and the imams.

The Azerbaijanis have increasingly demanded more cultural and linguistic rights, especially the right to education in the Azerbaijani Turkish language, a right that is enshrined in the Iranian constitution. However, in reality schooling in Azerbaijani Turkish is prohibited and at the Iranian universities there is not a single linguistic department for Turkish. Alongside this, all state television and radio channels are broadcast in Farsi, crushing the constitutionally granted rights for minority languages outside of the private sphere.

There are several reports of occasions when the Iranian authorities have arrested people in Azerbaijani gatherings. Azerbaijani Turks have been detained and sent to prison on charges such as “establishing organizations against the system” and “spreading propaganda against the system”. Some of these sentences were up to eight years long, and individuals were held without legal representation.