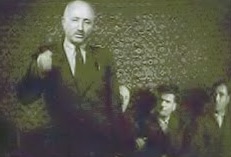 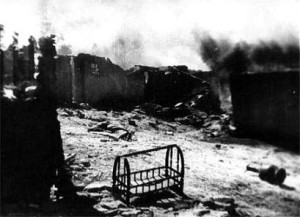 Evidence of vandalism and destruction of Southern Azerbaijan by Persian Army

People’s  Republic in 1946. During this invasion, 35000 Southern Azerbaijani civilians were killed and half a million were exiled or arbitrarily detained.

The mass killings was discussed at the Nuremberg Court in 1948 and finally in 1950  was legally recognized as an act of genocide.

The United States Supreme Court Associate Justice William O. Douglas in his famous book “Strange Lands and Friendly People” notes the event, he describes as vandalism done by Iran Army in Azerbaijan reminds him of the Nazis soldiers’ behavior towards France. This violence is known as the Genocide in Southern Azerbaijan. 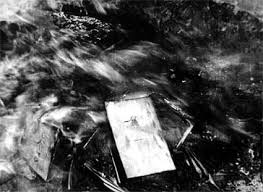 During the aforementioned invasion of Southern Azerbaijan by the Pahlavi regime in 1946  all the books found to be published in the Azerbaijani Turkic language were  burnt in public  on 17 December 1946.

The public use of Azerbaijani people`s mother tongue has been prohibited since then.

The United Nations has accorded the  aforesaid actions against the Southern Azerbaijanis between 15 December 1948 and 19 December 1966, as breach of  the international covenant on Civil and Political Rights, and it has also been declared as cultural genocide.

Since Azerbaijani language has played an important role in awaking of Southern Azerbaijan people and also in profile raising of Azerbaijani identity, every year in February 21, Azerbaijani activists prepare gatherings and demonstrations against the governing regime in the face of large personal risks.

In May 2006, a discriminatory cartoon was published in “Iran”, Iran`s 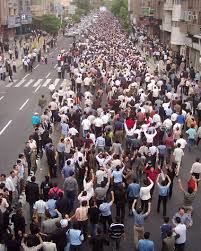 bestselling magazine analogizing Turks to beetles feeding from the Fars’s toilet. It followed to ask how to prevent the increase in the beetles population. And answered that they were mostly not able to talk in their own language, it suggest that, the Fars, should not even spare the time to defecate on the beetles.  This clear political and media bullying to promote cultural assimilation is strong in Iran, however, causes great offence to the nationalities.