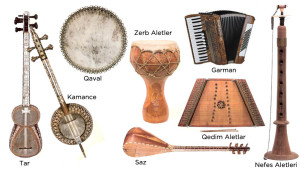 The music of Azerbaijan builds on folk traditions that reach back nearly 1,000 years. For centuries Azerbaijani music has evolved under the badge of monody, producing rhythmically diverse melodies.

Mugham and Ashik are some of the many musical traditions of Azerbaijan. Mugham usually consists of poetry with instrumental interludes. When performing Mugham, the singers attempt to transform their emotions into singing and music. In contrast to the Mugham traditions of Central Asian countries, Azerbaijani Mugham is more free-form and less rigid; it is often compared to improvised jazz. UNESCO proclaimed the Azerbaijani Mugham tradition a Masterpiece of the Oral and Intangible Heritage of Humanity on 7 November 2003.

Ashik is based on the mystical troubadour tradition, where a travelling bard sings and plays the saz, a traditional Turkic instrument. This tradition has its origin in the Shamanistic beliefs of the ancient Turkic peoples. Ashik songs are semi-improvised around common themes. Azerbaijan’s Ashik art was included in the list of Intangible Cultural Heritage by the UNESCO on September 30, 2009.