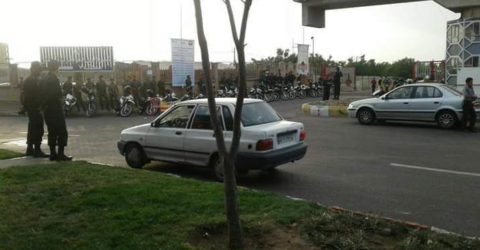 “Tarh e Nou” ( طرح نو New Plan) is the name of state-funded Newspaper which published explicit hate speech against Turks in particular and women in general. Over 40 million of Turks reside in different parts of Iran and more than a half of Iran’s population are women. The paper published a fictional short story making mockery of the Turks and insulting women. The story indicated that “there is no man among Turks”; “Turk are even inferior to women” and that “the Turks are unacquainted with their fathers!”

The publication is about to trigger a new wave of protests in South Azerbaijan. Residents of Urmia, the second largest city of South Azerbaijan were the first to protest the state-run-racism in Iran. Turks of other cities including Tabriz, the capital of South Azerbaijan declared protest for today. Therefore, the police and Special Forces are in full guard to supress such protests.

Turkic Parliamentarians including the Members of Parliament for Tabriz, Urmia and other Azerbaijani communities uttered anger in Iran’s Parliament, calling the government to put an end to the continues hate speech against Turks which has turned to a norm in Iranian society suffering from chronic Turk-phobia.

The present antagonism between Turks and Fars of “Iran” is very deep so much so that even General Karimian, the powerful Commander of Ashura Army of Islamic Revolutionary Guards has gone on to openly criticize the government and call the state to pass appropriate laws banning hate speech and racism against Turks since there is no anti-racist law or regulation whatsoever to ban hate speech in Iran.
Security forces have blocked main streets and squires in main cities including Tabriz, Ardebil, Urmia and Sulduz. Reportedly some arrested have been made to prevent massive demonstrations.

The Turks make up more than a half of Iran’s population. Turkic dynasties such as Saljug, Ilhans, Avshars, Safavid, Gajars, etc had been ruling “Iran” and surrounding countries for over 1000 years. The Persian racists believe that the Arabs and the Turks destroyed their “2500 years of pride” and they believe that the Turkic citizens now have to pay the price and have to be assimilated to Persians in retaliation. The state media constantly makes mockery of Turks in order to humiliate the Turks in general and Turkic children in particular to ease their negative assimilation and FARSization. However, such an enormous anti-Turkism has had the boomerang effect and in fact, has prompted a massive Azerbaijani-Turkic nationalism among Turks.

The last Turkic empire which ruled current Iran, North and South Azerbaijan, Armenia, Georgia, Turkmenistan, parts of Afghanistan and Pakistan and Iraq collapsed in 1925 as a result of U.K and U.S backed military coup by Reza Khan Mirpanj who later claimed to be “King” of Iran.
The Persian tyrant declared the Farsi as the sole official language and banned all other languages and cultures particularly Turkic which they feared the most. Late Riza Khan and his late son Mohammad Reza Pahlavi openly executed racist policies against all ethnic minorities most particularly Turks with the objective to fully assimilate them into Persians.

The systematic Persian racism was interrupted for a short period after Islamic Revolution, however, has continued by Islamic Republic government. Despite massive policies, neither Pahlavi nor Islamic governments have failed to assimilate Turks.