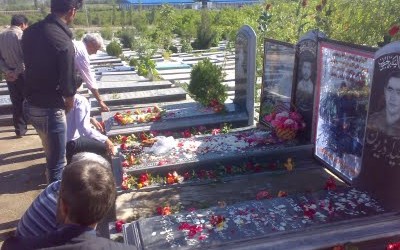 Today we are remembering our fallen heroes who stood up for freedom and liberty of our great nation on 22nd May 2006, and devoted their precious lives to their homeland yet to be freed.
Each and every fallen freedom fighter lives in the hearts and thoughts of millions of Turks. The evils may consider that they silenced our heroes forever, but they are mistaken. None of them is muted. With the clenched fists they still shout “FREEDOM” and “I AM THE TURK! “ through millions of young Turks in Tabriz, Urmu, Sulduz, 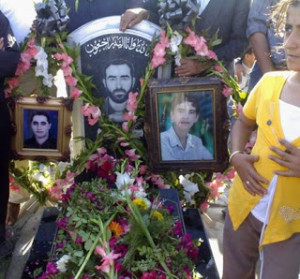 Ardebil, Zengan, Karaj, Astara, Hamadan and even Tehran.
Every hero’s blood has turned to the seed of South Azerbaijan’s strong and undefeatable freedom tree.
Let the racists know that the brothers, sisters, sons and daughters of whom they massacred will ultimately make them pay the prime price and bear the harshest punishment and rest assured we will ensure survival and freedom of this great nation.
With tears for our martyrs and cheers for our living freedom fighters,
SouthAzerbaijan.com

Background
In May 2006, a discriminatory cartoon was published in “Iran”, Iran`s bestselling magazine analogizing Turks to beetles feeding from the Fars’s toilet. It followed to ask how to prevent the increase in the beetles population. And answered that they were mostly not able to talk in their own language, it suggest that, the Fars, should not even spare the time to defecate on the beetles. This clear political and media bullying to promote cultural assimilation is strong in Iran, however, causes great offence to the nationalities.
Thus, on the 22 May, hundreds of thousands of Southern Azerbaijanis demonstrate in Tabriz and other major cities, and even some of the smaller towns of Southern Azerbaijan.
During the uprising hundreds of protesters were killed and injured, and thousand more imprisoned. However, it became a turning point in the Southern Azerbaijan national awaking movement’s resistance against the religious theocracy which dominates in Iran. Since then, every year on “The National Uprising Day” Southern Azerbaijan people do demonstrations and have ceremonies in memory of those killed in 2006.