South Azerbaijanies Demand Their Right To Self Determination 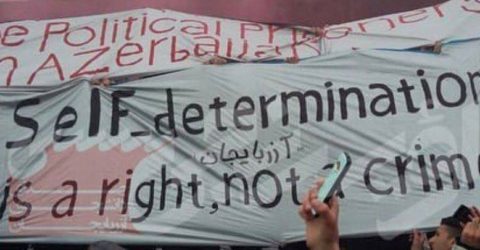 Over 100 thousand Southern Azerbaijanies matched to the Tabriz Stadium to cheer for their popular soccer team, The Tractor . They chanted anti- racist and anti-state slogans including calls for reunification of the South and North Azerbaijan : ” Azerbaijan Shall Reunify…Tabriz Shall be The Capital!”

The crowd also demonstrated banners demanding freedom for Turkish political activists and opend a large banner which read: ” Self Determination is a Right, Not A Crime”

The crowd went on chant slogans in favour of Uyghurs of Eastern Turkistan under China’s invasion.

Reportedly one of the crowdiest match in the world’s soccer history was the match between the Iseghlal of Iran and Tractor of S.Azerbajan which took place on Friday Feb 15th 2019 and resulted 1-0 in favour of Tractor of S. Azerbaijan.

Categories: NEWS
← Political Prisoners Begin Hunger Strike On Mother Language Day
South Azerbaijanis Stand Up For Karabakh: ” Karabakh is Ours, Will Remain As Such!” →