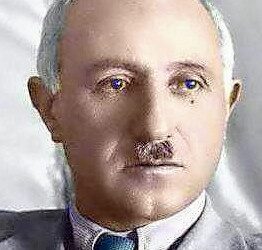 The 26th of August remarks the 128th birthday of the martyred leader of South Azerbaijan Independence Movement S. J. Pishaveri.

“…He was very happy with the victory of the Azerbaijani National Government. He collected orphans from the streets and gave them shelters, distributed land to villagers, gave freedom to women, and opened Turkish-language schools …. In December 1946, he was invited to Baku. He told me to join him. He said that we would return in 2-3 days. But our trip took very long …

After M. Bagirov’s last conversation with Stalin, Peshevari was given time to think. After talking to M. Bagirov ( The head of Soviet Azərbaijan), he was very angry. He said that they deceived us by bringing us here. What would people tell me if I agree to what he ( Stalin) says?

I will return! I will gather the troops. We will gather the martyrs and fight as partisans …. We can’t stay here (North Azərbaijan USSR )anymore, we have to leave the next day, or the day after tomorrow … ” Few days later he was killed in a car accident by the order of Stalin!