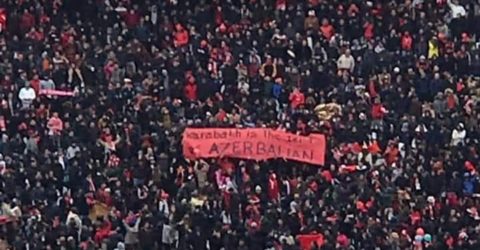 Over three dozens of protesting Tractor Football fans have been detained by the security forces during and after the March 1st protest in the Sahand Stadium of Tabriz, where a hundred thousand Tractor club fans raised Azerbaijan’s flags, chanted” Karabag is ours, will always be” and fired the flags of Armenia.

According to local sources, buildings belonging to Armenians in Tabriz are being guarded by local law enforcement agencies including the building of Ararat Sports Club.

On March 1, southern Azerbaijani activists wrote the slogan “Karabagh is an integral part of Azerbaijan” on the building of the Ararat football club.

Categories: NEWS Tags: Azerbaijan, Karabakh
← South Azerbaijanis Stand Up For Karabakh: ” Karabakh is Ours, Will Remain As Such!”
Activist Challenges Supremacy of Farsi; Maks Defense Submissions in Turkic →