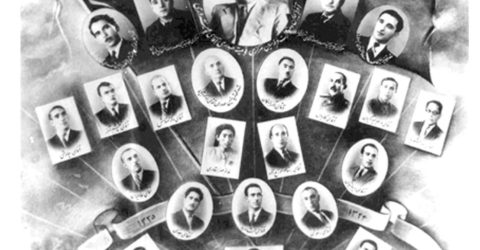 Haji-Mirza Hassan Rushdie established Iran’s first-ever modern school in 1887 at the Sheshgilan district of Tabriz. When the Pahlavi regime dissolved this school only because the base language of education was Turkish, it became clear that this regime had its ideology solely based on racism. The ideology that has tied every non-Fars ethnic group’s destiny into genocide and taken away their most basic of the human rights, which is the ability to study in their mother tongue.

After the political and social analysis of the country’s situation, the Azerbaijani Democratic Party, with its democratic slogans such as freedom of opinion, freedom of speech and the press, came in to the power and during its short lifetime had great achievements for the Azerbaijani people. Such as:

–        Officializing the Turkish language and publishing of Turkish textbooks for Azerbaijani people.

–        Establishment of Azerbaijan University in Tabriz while until then, Tehran was the only city with a university.

–        Division of lands among the farmers and solving the interest dispute between the property owners and farmers. While Pahlavi dynasty had no solution for such problems until 1962.

–        Providing the people of Tabriz with tap water years earlier than Tehran.

Even the enemies of Azerbaijan Democratic Party could not resist admitting the fact that Pishevari government brought such achievements for the Azerbaijani people in one year, that Pahlavi dynasty failed to do so in 20 years.

However, there are chauvinist tribunes in Iran, which try to declare that Azerbaijan People’s Government was established by Soviet elements and had no popular position. Such propaganda can be easily rejected by referring to statements of the American consulate in Tabriz at that time stating that, “This movement is heavily supported by the local people of Azerbaijan because they are truly dissatisfied with the central government’s actions”. Wallace Murray, the American ambassador to Iran at that time highlights in his reports that “Iranian officials deny the Azerbaijan Democratic Party’s popular position, while American and British consulates believe in the ADP and the hatred Azerbaijani people have against the central government.”

It is worth noting that Azerbaijan People’s government gained its legitimacy in accordance with the right to self-determination in international law. The international society has recognized a liberation movement as an organization or political movement leading a rebellion, or a non-violent social movement, against a colonial power or national government, often seeking independence based on a nationalist identity and an anti-imperialist outlook. The right to self-determination is one of the most important legal measures of any international organization.

Azerbaijan People’s Government declares in a letter to the Security Council dated January 28 1946 “5 million Azerbaijani people have been able to consider themselves a nation, because of the language, literature, history and national culture. Therefore, this nation will not be living under the dark shadow of Fars group. This nation is ready to take great sacrifices to gain liberty and national governments. The Azerbaijani nation has been under the cruelty of colonialists for ages and has just started to thrive under the normal and human conditions, and shows great ability in implementing and maintaining of the People’s Government. This government has been established by the people’s will and in accordance to the Atlantic Charter, therefore its legitimacy is unquestionable. In this letter, the Azerbaijani people ask the Security Council to recognize the People’s Government officially. This is the only way for our people to gain the right of self-determination without any hostile interference.”

Nevertheless, when the Azerbaijan People’s Government found out that eastern and western superpowers support the Pahlavi dictator regime and have no tendency to recognize self-determination right of Azerbaijani people, they signed an agreement with the representative of the Iranian regime. Following terms were a part of the agreement: Turkish language will be taught in higher education institutes of Azerbaijan. Azerbaijan nation army will be considered a part of Iranian army.

It is worth noting that Azerbaijan people’s government had not been ignoring rights of the religious minorities, in this regard the article 13 of the agreement states that Kurdish, Assyrian and Armenian minorities are also a part of this agreement and have to right to study in their own language until the 5th grade. However, Iranian regime with the green light of American and soviet powers started an armed conflict against the Azerbaijan People’s Government, In a situation that its army was to be considered a part of Iranian army and had surrendered due to the agreement.

The Iranian army committed genocide acts against the Turkish people. Still many totalitarian intellectuals keep silent about these mass murders for their own profits. Following the genocide:

–        More than twenty thousand had long prison sentences, including Safar Khan Ghahramani, an individual who spent 32 years in prison and became a heroic symbol of resistance for Azerbaijani people.

–        More than seventy thousand people left their life behind, seeking asylum in the Soviet Union.

Story of the refugees who fled to the Soviet Union is another tragedy that has to be investigated individually. Many of these refugees that refused kremlin’s orders to join the Toudeh party, were subjected to persecution of the intelligence agents and were exiled to Siberia. Jafar Pishevari, the leader of Azerbaijan People’s Government was killed in a crash plot set up by KGB. In Pahlavi regime’s deadly revenge on Azerbaijani people, more than a hundred thousand people were killed, prisoned or displaced.

Henry Dallas, one of the close associates of President Roosevelt writes: “It is a shame to acknowledge that Iranian army with the leadership of General Schwarzkopf and command of American consulate, has started a deadly conflict against the people in Azerbaijan. The Azerbaijan people’s leaders are taken into prison, many are killed and families are displaced.”

William Douglas, American judge also writes: “Iranian army placed terror when they entered Azerbaijan, murdered many and did everything that they wanted. Russian military’s behavior was much more civilized compared to what Iranian army did. Iranian army left hateful and terrible memories for the Azerbaijani people. In 1946, the Iranian army with the help of the Americans and orders of Qavam os-Saltaneh, was brutally attacking everybody who had a part in People’s Government. Detaining them and later executing them by fire squads or the gallows.

On September 10, 2000, Keyhan newspaper writes: “Mohammad Deyhim considers the fleeing of Pishevari a peaceful revolution, while more than twenty thousand people get killed by the imperial army.”

Of course, the Pahlavi regime’s crimes are not only limited to physical demise of Azerbaijan intellectuals. On December 17, 1946 in an anti-cultural action in Tabriz, the imperial forces set fire to all the books published in Turkish to show their hatred towards the Azerbaijani culture. This day is now dubbed the “cultural genocide” day of Azerbaijani national movement, and our people will never forget it.

Pahlavi regime considered the Azerbaijan and Kurdistan issues an internal problem, naming the people who participated in these actions “constitutional criminals” and confronting them accordingly, therefore ignored peaceful resolutions of the international (law third paragraph of article II of the United Nations Charter). Noting the 1899 Convention which was reaffirmed in 1907 and rapidly converted into customary law, states that any state, without complying with this convention, will commit an unannounced war. This act will be illegal and will be considered a violation of international rules. Also in Geneva conferences of the 1947 and 1977, it was decided that national liberation movements would be considered international issue rather than an internal issue and the victims will be treated as victims of the war. The agreement was called customary principles of international law.

Now that we are at the 72nd anniversary of the  genocide, we must highlight how Islamic republic officials alongside totalitarian intellectuals, imperialists and every other opposition group, have been denying this human disaster for their own profit. The Azerbaijani people will never forget this disaster and the people who deny it.

Nowadays, the Islamic republic officials take no action to eliminate the political discrimination of non-Fars ethnic groups. On the contrary, they continue this ideology of racism initiated during the Pahlavi regime. It has been announced many times by them that education of mother tongue is not a national or local right of any ethnic group.

The Azerbaijan National Movement activists no longer believe that Islamic republic officials would do anything to eliminate the ethnical discrimination. These officials have even implemented an intentional drought of Lake Urmia to prove that they only possess the knowledge of destruction.  We deeply believe that elimination of such discriminations can only be achieved by the ethnical groups of the country through the right to self-determination, the way it was achieved briefly by the Azerbaijani and Kurdish people. Currently, Azerbaijan national activists, especially the “Yeni GAMOH” activists are considering International Law and the Declaration of Human Rights in their peaceful battle towards gaining liberty of the South Azerbaijan.

Finally yet importantly, I offer my deepest condolences to the great Turkish and Kurdish nations,  on the anniversary of their genocide. Moreover, I hope for liberation of all the people, who are discriminated because of their ethnic group.