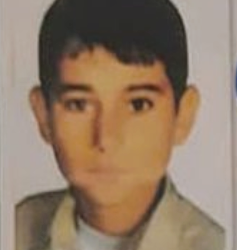 Among others, a 12 year old child, Amirreza Abdullahi of Parsabad, Mugan, South Azerbaijan turned out to be one of the indiscriminate Shootings at the protestors in Islamshahr S. Azerbaijan.

According to reports, Amirreza was merely a bystander in ” a wrong place at wrong time” and had been shot dead by security forces of the occupying regime of Iran. His body was transferred to his hometown of Mugan three days after his death and his family was forced to burry their child in secrecy and without authopcy to obtain a certificate for cause of death.

Earlier it was reported that Amir Hussein Abbasi was killed in Zanjan by security forces, Seyed Ali Fatuhi Kuhsare in Ardabil and Ali Hussein in Tabriz. Also, 20-year-old Hadi Gurbani of western Azerbaijan province, was killed by security forces during mass protests in Tehran’s Islamshahr.

According to international human rights organizations around 300 people were killed by the Islamist regime of Tehran in Southern Azerbaijan and other occupied territories of Iran.

More than 1000 Azerbaijani activists have been arrested and it is feared that they are being tortured.