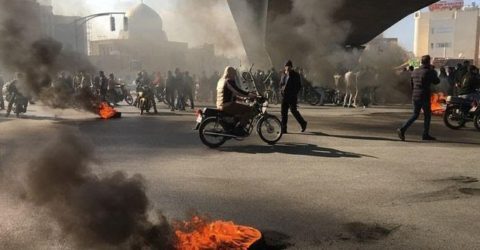 The decision of occupying regime of Tehran to increase the fule price 300 percent has angered Southern Azerbaijanis who stopped their vehicles and marched into streets of many cities including the capitals Tabriz and Urmia, Zengan and Ardebil to protest the government’s social, economic and cultural policies.

The security forces attacked the protestors with tear gas, water cannons and rubber clubs. Reportedly, many were injured and hundreds were arrested. According to unverified reports there have been a few casualties in S. Azerbaijan one of whom is identified as Ali Huseini.

The regime of Tehran has completely cut off internet and cellular services to fully isolate the country from rest of the world.

Tabriz, Zengan, Ardebil, and other cities of South Azerbaijan