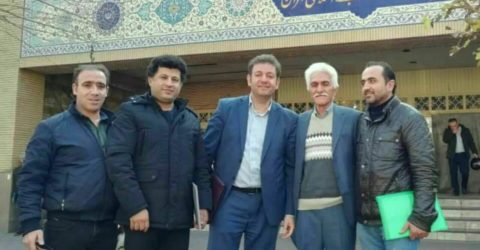 The Islamic Revolutionary Appeal Tribunal of Tehran which was hearing the appeals of four South Azerbaijani activists, Mr. Akbar Azad, Alireza Farshi, Behnam Sheikhi and Hamid Monafi Nadarli rushed the appellants to make their submissions. They have been sentenced to 10 to 15 years of imprisonment for merely organizing a peaceful gathering on International Mother Language Day 4 years ago. At today’s brief appeal hearing which did not last an hour for four appellants, the activists maintained their innocence and argued that organizing peaceful protest and demanding education in their mother language are their basic human and constitutional rights and that the lower court’s finding of “guilt” and its harsh sentences must be quashed. The Appeal Tribunal deferred its decision and therefore, the activists fates are to be decided.

Categories: NEWS
← Mothers Were Told By Persian Officials: “We Can Execute Detainees & You Could Do Nothing”
South Azerbaijani Leader’s Family Deprived Of Livelihood →