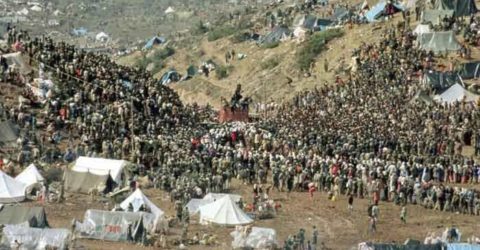 Kurds make up around 10 %,  in some regions of  West Azerbaijan province up to 20% of the population which  has triggered land claims by almost all Kurdish groups supported and backed by the autonomous Region of Iraqi Kurdistan. Recently,the only kurdish member of Urmia City Council departed the Council’s meeting because the language of the council was Azerbaijani Turkish. The Kurds of Urmia also has demanded the regime of Tehran to ban the Turkish signs in Urmia.

Land claims have caused a lot of tensions among the political groups and the people of South Azerbaijan have been furious about the future, taking into consideration the destructive and terrorist attacks carried out by the terrorist Kurdish groups such as PKK. PJAK, etc., in the West of South Azerbaijan.

SOURCE OF THE DISPUTE: REPUBLIC OF
MAHABAD_ IN_EXILE

One of the main sources of the is the People’s Republic of Azerbaijan established in 1945 and the autonomous region of Mahabad established later in the same year. Since the Kurds who were led by Gazi Mohammed, the late leader of the Democratic Party of  Kurdistan, failed to establish their government in the region of Irani Kurdistan, instead, they proposed to establish it in- Exile at Soyuqbulaq/Mahabad city of South Azerbaijan.

According to the Soviet KGB Archive materials studied by professor Jamil Hasanli, the Prime Minister Pishavari and leadership of the Democratic Party of Azerbaijan had strongly resisted  the idea as they duly thought that the approaching generations would be perplexed and such an risky idea would cause land claims against South Azerbaijan which is the case right now.

However, since the Democratic Government of Azerbaijan was dependent upon the Azerbijan (North) Soviet Socialist Republic and indirectly to Moscow, the Kurdish leaders managed to obtain a decree signed by J. Stalin  which demanded the South Azerbaijani National Government to allow establishment of  the Kurdish Autonomy in Exile at the city of  Mahabad of Azerbaijan which  was named by Kurds as  “Republic of Mahabad”.

Both Republics were eradicated and mass ethnic cleansing took place in South Azerbaijan since the aggressive occupation of the region by Iranian Army backed by Western Allie  in December 1946 through January 1947.

Since then, South Azerbaijan has been divided to many provinces and Kurds have been resettled by the Shah and later the Islamic regimes of Iran to the strategic regions such as borders with Turkey to impose a demographic change.

However, the Kurds distort the history  and make claims that the “Great Kurdistan” ’s capital would be Mahabad  and even go on to claim Urmia, the capital city of West Azerbaijan Province would be the “Kurdish capital” which are  historically and lawfully part of jurisdiction of Azerbaijan.

Kurdish migration is known to be another source of wrongful land claims against South Azerbaijan. It is a very well-known fact that the iraqi Kurds have fled the occupied region of South Azerbaijan due to Kurdish displacements of  World War I,  World War II, the well-known Iraqi Kurdish conflicts of 1963, Pre and post Anfal, and 1990s Gulf War and the recent American invasion of Iraq.  Therefore, it is relevant to make an excursion to the recent Iraq-Kurdish Conflicts.

Although the pressure for Kurds to  was less intense in Iraq (where the Kurdish language and culture have been freely practiced), government repression has been the most brutal. Short-lived armed rebellions occurred in Iraq in 1931–32 and 1944–45, and certain armed insurgences took place throughout the 1960s under the command of , leader of the Iraqi Kurdish Democratic Party (IKDP), who had been an officer of the Republic of Mahābād. A failed peace accord with the Iraqi government led to another outbreak of fighting in 1975, but an agreement between Iraq and Iran—which had been supporting Kurdish efforts—later that year led to a collapse of Kurdish resistance. Thousands of Kurds fled to Iran and Turkey. Low-intensity fighting followed. In the late 1970s, Iraq’s  instituted a policy of settling Iraqi Arabs in areas with Kurdish majorities—particularly around the oil-rich city of Kerkuk—and uprooting Kurds from those same regions. This policy accelerated in the 1980s as large numbers of Kurds were forcibly relocated, particularly from areas along the Iranian border where Iraqi authorities suspected Kurds were aiding Iranian forces during the IRAN IRAQ WAR  (1980–88). What followed was one of the most brutal episodes in Kurdish history. In a series of operations between March and August  1988, code-named Anfal (Arabic: “Spoils”), Iraqi forces sought to quell Kurdish resistance; the Iraqis used large quantities of  Chemical Attacks  on Kurdish civilians. Although technically it was not part of Anfal, one of the largest chemical attacks during that period took place on March 16 in and around the village of Ḥalabjah, when Iraqi troops killed as many as 5,000 Kurds with mustard gas and nerve agent. Despite these attacks, Kurds again rebelled following Iraq’s defeat in the the Gulf War (1990–91) but were again brutally suppressed—sparking another mass exodus.

With the help of the United States; however, the Kurds were able to establish a “safe haven” that included most areas of Kurdish settlement in northern Iraq, where the IKDP and Patriotic Union of Kurdistan—a faction that split from the IKDP in 1975—created an autonomous civil authority that was, for the most part, free from interference by the Iraqi government. The Kurds were particularly successful in that country’s 2005 elections, held following the fall of Saddam Hussein and the Ba’th Party in 2003.

Western Azerbaijan’s Governor has confirmed that the Province of West Azerbaijan  has  hosted at least 1 million 600,000 Iraqi Kurdish citizens in the last half century.

According to the West Azerbaijan Governor’s deputy  on political  and security matters and the  and Imam Juma’at of Urmia, the province has resettled more than one million and 600,000 Iraqi Kurds in the 60s and 70s, in addition to the hundreds of thousands of Iraqi Kurds who have fled to western Iran.

On this basis, it can be said that West Azerbaijan, is one of the regions that has hosted hundreds of thousands of Iraqi Kurdish refugees in the last half century due to security crises in Iraq.

Hojat al-Islam Seyyed Mehdi Qureshi, the Imam of Urmia, recently spoke to the site, assessing the Iraqi Kurdistan’s climatic role in preventing terrorist acts and invading Iran, saying: ” We have been in contact with Iraqi Kurdistan since the 5 years of the imposed war ( 1359 to 1367 (IRI calendar – mainly the 60s), when we once welcomed about one million refugees to West Azerbaijan and now expect to control and prevent the infiltration of terrorist elements in an attempt to secure the borders in the region. “

But regional experts say Iraqi Kurds’ migration to the west  Azerbaijan has even  a longer history.

“At that time, the population of West Azerbaijan was 2 million and 400,000, according to statistics, with a quarter of the Iraqi refugee population in the province,” said Alireza Radfar at the international conference on crisis management and refugee protection in Urmia. ”  IRNA, on Thursday, January 9, 2009,

Hundreds of thousands of Iraqi Kurds have been forced to seek refuge in  Western Azerbaijan province over the past half-century, many of which despite the end of the crisis in Iraq they  did not return to their country.

Internal migration has also been common in Iran, with many Iranian Kurds from the provinces of Kordestan and Kermanshah moving west to Azerbaijan, settling in a region that is better off in terms of business and environment.

The most important of these migrations was first carried out in 1350  with the migration of more than 100,000 Iraqi Kurds to Suqbulaq (Persinized name:  Mahabad) region of West Azerbaijan.

The second migration took place in late winter and early spring, which is a widespread migration of millions of Iraqi Kurds to Iran and Turkey.