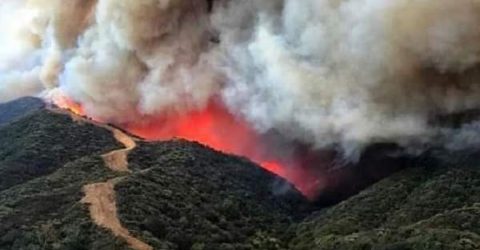 South Azerbaijani opposition beleive the disaster was deliberately caused by colonial regime of Iran as part of rendering the region unhabitable to impose forced migration of Turks.

Tehran’s indifferent attitude has outraged even regime’s own representatives in the occupied South Azerbaijan.

As reported, large-scale fire occurred in the forests of Southern Azerbaijan in recent days.

Local firefighters in Azerbaijan have few options to extinguish the fire, and officials have repeatedly asked the authorities in Tehran to send a helicopter to the scene. However, appeals from local people and officials were ignored and no helicopters were sent to the area. As a result, the fire continued until Friday and hundreds of hectares of forest were turned into ashes.

This situation has led to protests by many officials of the Eastern Azerbaijan province along with the Azerbaijani population, including Mohammedali Al-Hashim, the Imam’s cleric of Tabriz and the governor of East Azerbaijan, Mohammedza Purmahmadi.

Director General of the East Azerbaijan Natural Disaster Office, Mohammedbagir Gulbahar, said in a statement late Friday that the fire had been extinguished. Three helicopters were dispatched to the scene on Friday.

Mohammed Al-Hashim called on Interior Minister Rahmani Fazli to respond to the fire in a timely manner in Friday prayers.

According to Imam Juma, the fire has still not been extinguished after the fire has burned some 300 hectares.

Governor of East Azerbaijan, Mohammedza Purmammadi, also protested that the fire was not extinguished in timely manner.

He said at a fire event on Friday that local residents and authorities had gone to the area since the incident and tried to extinguish the fire themselves. But for that you need a helicopter. We appealed to the Chief of Staff of the Armed Forces, the Ministry of Defense and the Army, taking into account the circumstances, but our request has not been met.