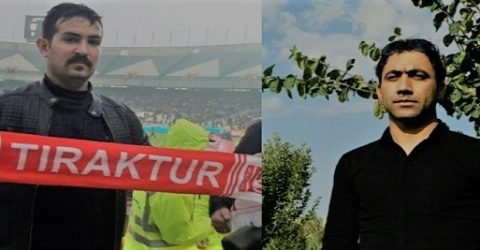 The Azerbaijani activist Tohid Amir Amini and Kiyanush Aslani, who were detained in Tehran on February 21, are still held in an uncertain state as no official charges have been laid against them.

Kiyanush Aslani in a brief contact with his family one day after his detention, told that he was held in the 209th Division of the “Evin” Prison in Tehran.

The activists’ family has repeatedly appealed to the competent authorities to investigate the reasons and condition of their detention, but no response has been released as of yet.

The regime of Tehran has refused to release information as to why the activists are currently being held. However, it is presumed that they are being detained for publishing some posters in relation to mother language. It is feared that they might be subjected to torture and unusual treatment as it is regularly used against political activists in Iran.

Kiyanush Aslani is studying at Civil Engineering at Tehran’s Islemshahr Azad University and Tohid Amir Amini works in Tehran, but they are both from South Azerbaijan.

Tohid Amir Amini was previously detained for attending in some protests and gatherings in support of South Azerbaijani cultural and linguistic rights.