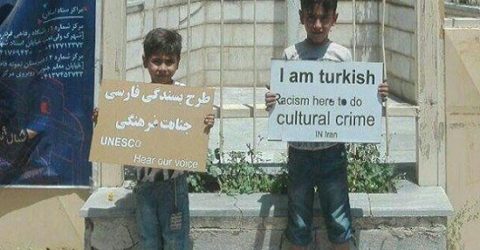 The colonial regime of iran has initiated an extreem cultural cleansing policy against Turks and other non-persian peoples and unrepresented nations under its occupation.

Tehran has recently initiated the practice of “Farsi sufficiency” «بسندگی فارسی » assessment for the school-aged children.

According to the new practice, designed and implemented by the Ministry of Education, children who lack ability to answer the test questions in farsi are refused admission into regular schools and instead, they are referred to schools for children with “special needs and disabilities”.

The new law has caused enourmous agitation amongst the South Azerbaijanis and other ethnic groups since the South Azerbaijani provinces are the first territory which this racistic practice is being imposed. School kids have initiated a civil protest calling international community including United Nations for help.

The regime of Tehran believes that by implementing such a practice, it would force the Azerbaijani parents to speak farsi at home instead of their mother language and this would successfully eradicate Azerbaijani Turkic language and culture.

Since the invasion of South Azerbaijan in 1946, Azerbaijani Turkic, the language spoken by 35 million has been completely banned. There is no single public or private Turkic school in the entire country.

The cultural activists who demand education in mother language are arbitrarily detained, tortured, charged with “attempt against national security” and sentenced to lengthy prison terms.

The farsi-speakers hardly make up the 30 percent of the population in Iran. Nonetheless, their language is the only official language.