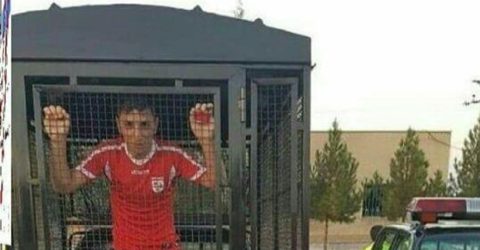 Kazem Safabakhsh a.k.a Koroglu, the well known leader of fans of the “Tractor Azerbaijan” Soccer club has been found guilty of “establishing unlawful group to subvert the Islamic Republic” and “conducting organized “propaganda” in favor of Azerbaijan, Karabakh and seperation” of the people of South Azerbaijan, occupied and annexed into iran in 1946.

On November 21st 2018 Mr. Safabakhsh was arrested during a soccer match between Tractor Azerbaijan and Perspolis of Iran. He has been held in Tehran’s notorious Evin prison in total incominicado and deprived of his simple right to an attorney and family visitation.

According to the court order, Kazem established a group called “Dali Qanli” along with 21 other Turkish rights activist of Tehran and Albors province and orchastrated slogans in favour of Azerbaijani ” scisionists”.